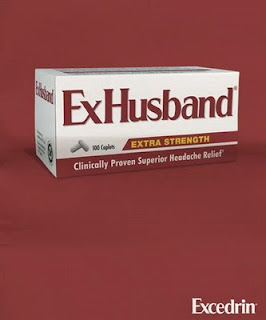 Having been twice-married, I have lived through the experience of being a "husband." Since both marriages failed I suppose it could be easily said that I also failed as a husband, which I don't mind admitting. I completely went through the motions of being a husband and never really took the role all that seriously. It was just another of the various identities I wore for a time.

The etymology of the word husband comes from the Nordic languages, "Husbondi" (master of the house). And at least I fulfilled that requirement as I managed to uphold. The "life partner" to the wife, not so good, obviously. When I bring the experiences of my marriages to the present and look at them, I see that I existed within my own private bubble of thoughts, secrets and perspectives that I never shared. Neither wife had any idea who I really was. I don't blame them. I simply didn't know how to share myself within any type of honesty, let alone self-honesty. As I have said, it was as if I was performing a role, and a rather shallow one at that. I did not tell the women who ended up marrying me that I really didn't want to marry them. I simply went along with it. You could say that I sacrificed myself for them so they wouldn't be alone because nobody else would marry them (or so I thought). I didn't tell either one that from the first day of marriage I would be leaving open a back door to escape at my time of choosing.  At the time I didn't know what I really wanted, to be free or to be legally bound to someone for the rest of my life. It was so much work trying to find someone interested in me in the first place. And while I never deluded myself that I was "in love" with either woman, it seemed to be a better bet just being with someone however which way they wanted it. They both asked and I agreed and immediately regretted the decision. Why couldn't I just say what I really felt? Because I was a coward. Because I was lazy. It apparently was far easier for me to sacrifice my life to women I didn't love (or rather, pretended to love) than to just say no, not interested in that, babe. I didn't have my priorities straight, it seemed.

But there was a payoff, as there always are in relationships. Shelter, sex, companionship and largely got to do what I wanted, which manifested with me alternating between being a nice husband and a royal jerk.

The upshot is that the consequences that arose from my self-dishonesty has made it very clear that none of this was justifiable, necessary or smart. Pure lunacy. And I caused a lot more problems for everyone instead of being a great help. Not cool and I am sorry it ever happened.

I commit myself in relieving the character of the husband for good and not activate him if ever I am asked to marry again.
I commit myself to take my relationships seriously, and if I ever get married again  I will not disrespect my partner by not telling her what is going on within me.
I commit myself that will not use the back door of my secret mind thoughts to deceive and delude my partner into a false reality where she thinks everything is fine while I'm planning to escape.
I commit myself to no longer offer myself up as a sacrificial relationship to another because a sacrifice only has value if that value is destroyed by the sacrifice - and whatever is destroyed by sacrifice can never be replaced.

Posted by theseeker at 9:41 PM