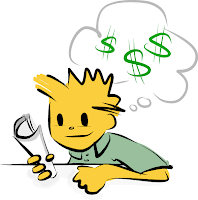 How can it be that one day I was completely stoked into getting to the store and selling shit at Big Boxco and experience a great, satisfying day and the next day I worry and fret about performing the exact same actions and proceed to lay one flat, uninspired gigantic egg? Well, it happened and let me share how that came to be and how I was able to understand what happened in my process in order to self-correct myself when I see myself repeating the steps that led me down that road.

Generally, I’d been feeling really good about my performance so far throughout this cycle. I feel I’ve been consistent and able to bring everything I’ve learned previously in sales and apply the new systems I am integrating into the mix. I’m having fun even though it is hard work. I look forward getting to the office to learn new things every day. I can’t think of a “job” that I’ve ever felt that way about.

This past Monday I was so sure I was going to get those numbers I was looking for and I had a ton of energy going in and I connected well with everyone I spoke to. It feels like I’m in a flow and everything clicks.

But afterwards, I felt a little worried about the next day, Christmas Eve. I had three flavors of the four pizzas left to offer, and I only had a few packs left of the one that people seemed to like. I allowed doubts and questions to creep into my mind how I was going to be able to get through the day selling two of the less desirable flavors.

I resolved to go out on the next day and make it great for myself and the club members, anyway.

The morning started promising. I dropped a bundle as I was setting up my table. I felt silly for allowing pointless worries to dampen my attitude. There was only one other vendor working a sample station and I thought I had it made!

But for reasons that weren’t readily apparent to me, people seemed slow to pick up anything from the table. The little dude in the back of my head began to track the clock and calculate how many units I’d have to catch up with in order to reach my goal. The deeper I got into the day, the more I felt that I was fighting a losing battle against time. I stubbornly relied on my training and on the systems I’d been taught, with no appreciable difference. I was caught in the horns of a dilemma - and I know myself well enough to understand that some time would have to pass after I walked through this point to apply effective self-analysis and learn from it.

And it came to me after I left a message for my team leader. The last thing I said was I didn’t have that connection with the people I normally had and in a second after I spoke it, I realized why. I was flat and had a crappy experience because I was... wait for it... afraid to sell what I had. And even though I told myself that I was going to have a super-duper day and would be swinging for the fences, that fear only became submerged and repressed. Those thoughts, fears and doubts directly influenced my energy level and my connection with the people.

This is an experience I’m sure everyone can relate to, and I am sure fears will pop up again. I understood it before, but now I have a clearer understanding of why protecting your attitude is so important. In a job where so much depends on one’s mental health in order to be a success, allowing doubts and fears to invade your mind is the quickest way to have a miserable day in sales. And what makes it even more crucial to understand is that those doubts and fears were all in my head! They weren’t even real! They were just ideas I had about some imagined scenario in imagined future outcomes that took me off-course and out of the present moment, which left me unable to be effective in that moment --- because I was believing the story I was imagining in my mind instead of being totally present in my reality and having fun with it as I usually do.

So, in order to release those suppressed fears and doubts for good, I forgave myself that I accepted and allowed myself to experience fears and doubts to become my experience that prevented me from connecting with people and reaching the goals I set for myself. I let myself off the hook. And I’m glad I went through it because I now better understand the points within myself I need to focus and strengthen. And that’s cool.
Posted by theseeker at 4:54 PM